When Michelle Parden took in an abandoned, pregnant cat named Mommy, she had no idea that her 1 year old Bulldog “Hammie” would end up with such a strong bond to Mommy’s kittens. Leery at first of letting the dog near the tiny kittens, they quickly formed a stable little”family”.

The kittens were born on Halloween, and Michelle’s son named them Pumpkin, Goblin, Frankenstein, Batman, Zombie and Elvira.

Since Mommy was a stray, she was under-nourished and had eye and respiratory infections.  Because of her poor health, the kittens started their lives with some problems as well, but all are now healthy and doing fine.

Michelle says that Hammie was very careful with the kittens. He would lift his paw to caress them gently, and gather together as if to nurse them.

Michelle has found forever homes for all the kittens, and though Hammie misses them, they still keep in touch and he gets to visit with them. 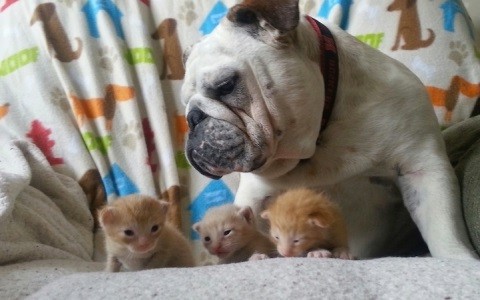