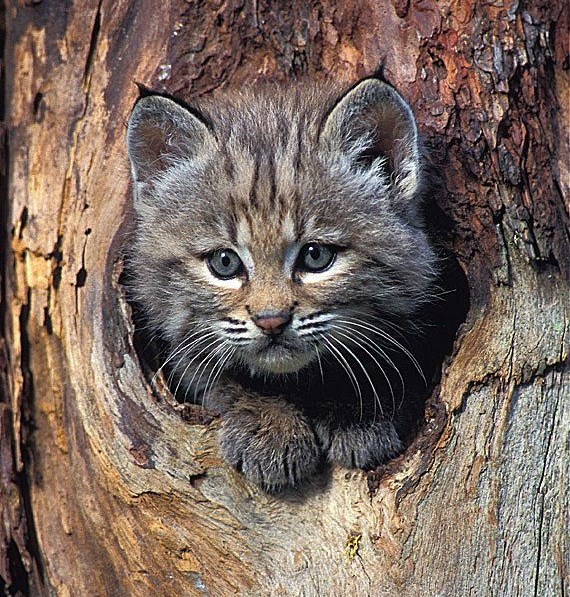 Cats are very athletic. They can quickly and easily climb a tree; whether it is one outside, your Christmas tree, or one that has been built specifically for them to climb (see that below!).

The problem is that their claws are constructed in such a way that makes them purrfect for climbing up, but not for climbing down, and this is why they often get stuck in trees. Some cats learn to work with their claws, instead of against them, and come down backwards. 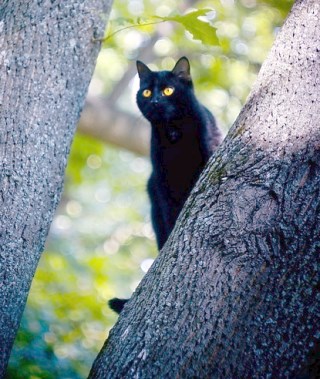 When my cat Me’owmers (or MowKitty, as we call him) was just a kitten, he climbed up into a tree and couldn’t get down. My youngest son was about 6 at the time, and he was very upset that his kitty was stuck and crying.

The lowest branches were about 10 feet up, so there was no way we could climb up there to rescue our kitty. Plus, he was another 8 feet above those branches.

A neighbor said we should call the Fire Department, but I had an idea I wanted to try first.

Actor Steve Martin to the Rescue!

If you’ve ever seen the movie Roxanne, with Steve Martin and Darryl Hannah, you might know what it was I wanted to try.

In the movie, Steve Martin is the Fire Chief of a small town. A lady calls in that her cat is stuck up in a tree, and she needs their help to get him down. His goofy Firemen jump on the fire truck and speed to the rescue, but being the clumsy guys that they are, they are struggling to get a ladder and hose set up.

Steve, in the meantime, has walked down to the lady’s house, stops under the tree, and begins opening a can a cat food (which he just happens to have on him) with a handheld can opener. The cat hears the familiar sound, and quickly comes down.

But Would That Work in Real Life?

So that’s what I did. I grabbed a can of cat food and a can opener and went out to the tree and began opening it.  MowKitty heard the sound and immediately started sliding down towards us. My soft-hearted son got even more upset at this point, because the kitty was coming down face first. He would slide a few inches, then sink his claws into the bark to stop the slide, nearly topple over his dug-in claws, then pull them back in and slide a bit further. It was jerky and awkward, but MowKitty was determined to get down to that food!

When he reached the low branches and couldn’t slide any further, he trustingly jumped to us. My older son caught him, we took him inside, and let him have the food.

So there you have it. If you have an outdoor cat, and it gets stuck up in a tree, try this easy way to get him or her down. If your kitty eats dry cat food instead of canned, you can get a cupful and shake it. Your kitty will recognize the sound!

Here is the cat tree, made specifically for kitties, that I was talking about earlier; plus a couple of other neat things. Click on them to see them full-sized. 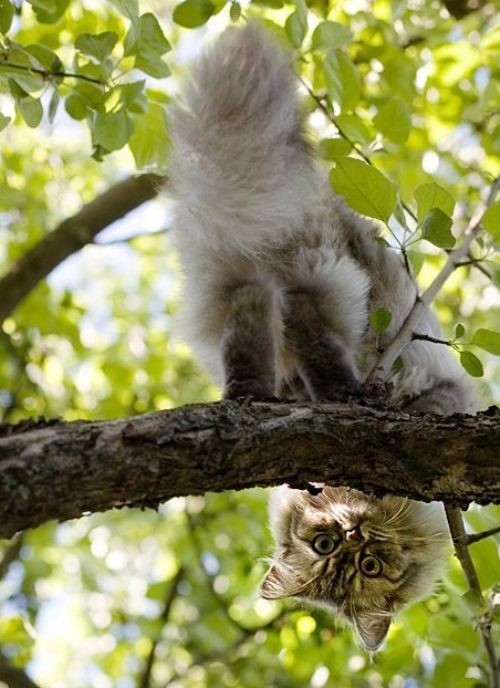 Have you ever had a cat get stuck up in a tree? What did you do?