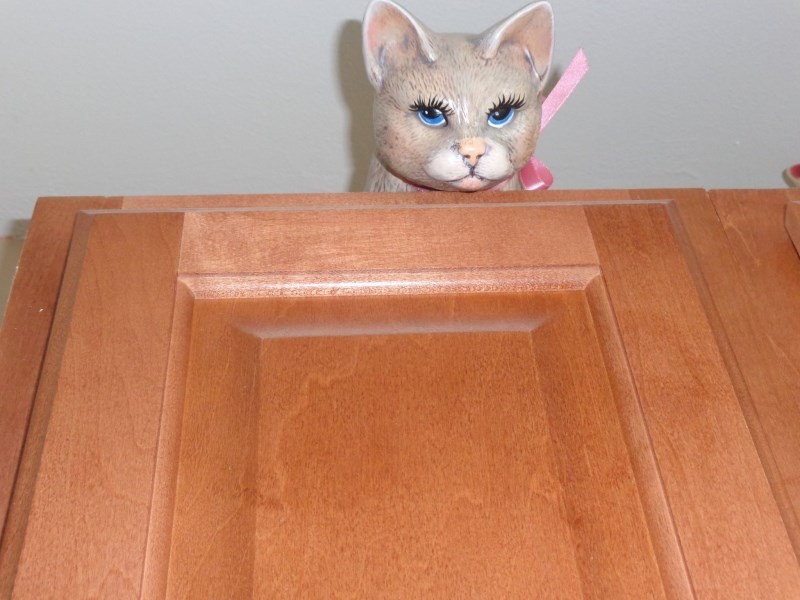 I have 2 kittens, Rocky and Rambo. I got Rambo from a cat rescue in September of 2012. They told me he was a boy cat, and he was such a roughie-toughie, so I named him Rambo. It turned out that he was a she, but I kept her name. She gets called Rambie a lot.

With Rambo joining our family, I now had 2 dogs and 1 cat, and I wanted to make it even. I adopted Rocky in August of 2013 at an adoption event at Petco. The adoption was through T.A.R.A. – The Animal Rescue Alliance. I was really impressed with them. They made me fill out a bunch of paperwork, and called my vet to see if my other animals’ shots were up-to-date and to see what kind of animal parent I am. I think that speaks well of them, that they check you out before allowing you to adopt.

So I now have 2 dogs and 2 cats. Rocky is the only male of the four. One reason I chose him is because they told me he got along with both dogs and cats.

Rambo didn’t like Rocky at first, but now they are besties. I knew they were going to be alright together when I found them using the litter boxes at the same time. Yes, I keep the litter boxes in the tub. I have two tubs. 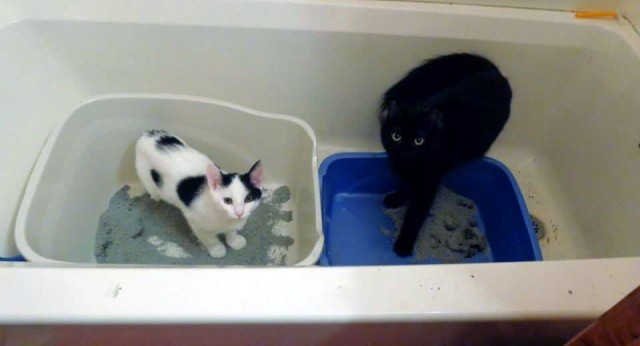 They sleep together most of the time, unless Rocky is sleeping with my 15 year old grandson, Jordon. Which is really strange, because it was just a few years ago that I was constantly yelling at Jordon, telling him to stop antagonizing my previous cat, Bob!

One night Rocky wouldn’t let Jordon sleep, so he put him outside the bedroom and shut the door. The next morning, when I got up, Rocky was curled up asleep outside Jordon’s door. 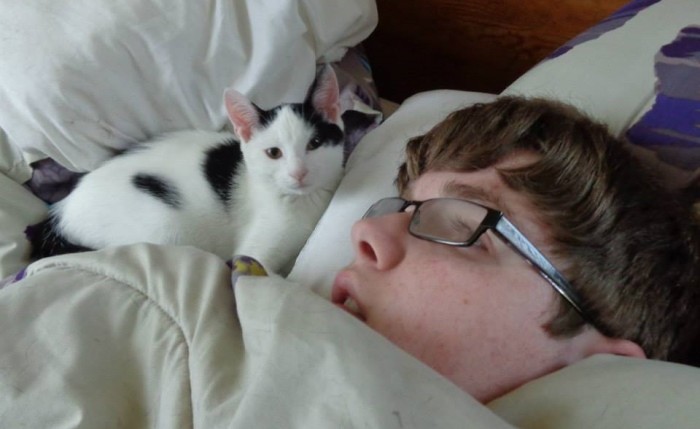 Both cats are very rambunctious at times, lazy at others. Rambo is shyer, and so Rocky has taken over. Rambo is a little nervous around the dogs, but Rocky doesn’t give a hoot about them.

Rambo settled down a lot when Rocky came. Before that, she was very rambunctious. She would run through the house, across the table tops, knocking down everything in her path.

Now, they like to race through the house together. Rocky will sometimes sneak up on Rambo and attack, for no reason other than to play.

I’m a huge animal lover, and I love having a house full of dogs and cats. They are my babies! I don’t have much room to sleep, since they all sleep with me. One of my dogs, an English Mastiff named Ms. Fang, weighs 140, so she takes up as much room as an adult human. But I always have company, especially at mealtime!

Rambo loves chicken and fish, and will be right up on me when I’m cooking either one. When I give her a chunk, she runs and hides with it, so the dogs can’t take it from her. Rocky isn’t much of a beggar, like the other three. Shelbie, my little white Westie, will scratch at my leg while I’m cooking, as if to say “Hurry up!”.

If ever I can’t find the cats, I shake the treat bag, and they will both come running.

My dad likes to buy me little knick-knacks from thrift stores, and he bought me a cat that hangs over the counter. It’s kind of big and didn’t really fit well anywhere on the counter; plus I didn’t want the cats to knock it off and break it, so I put it up high.

It’s the funniest thing – it drives Rambo crazy. She sits and stares at it for the longest time! Sometimes, she stretches up and tries to reach it. I got it down once and let her smell it; that satisfied her curiosity for a little while, but then she started staring at it again. It just cracks everyone up when she does it.

This is the cabinet cat: 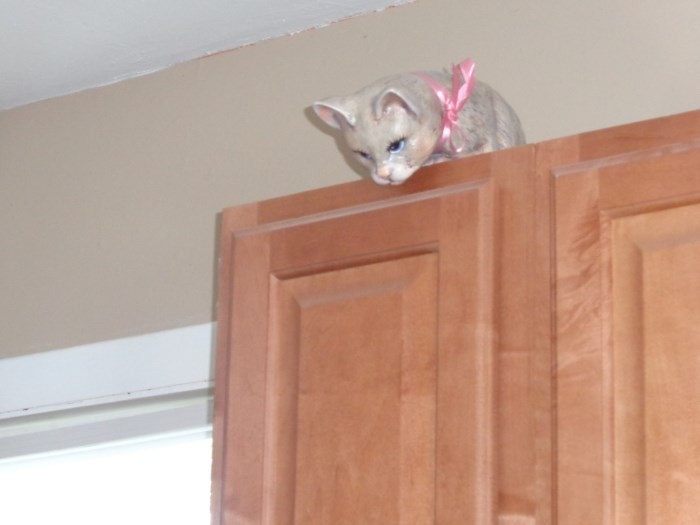 This is Rambo staring at the cabinet cat. You can see it way up at the top of the cabinets. 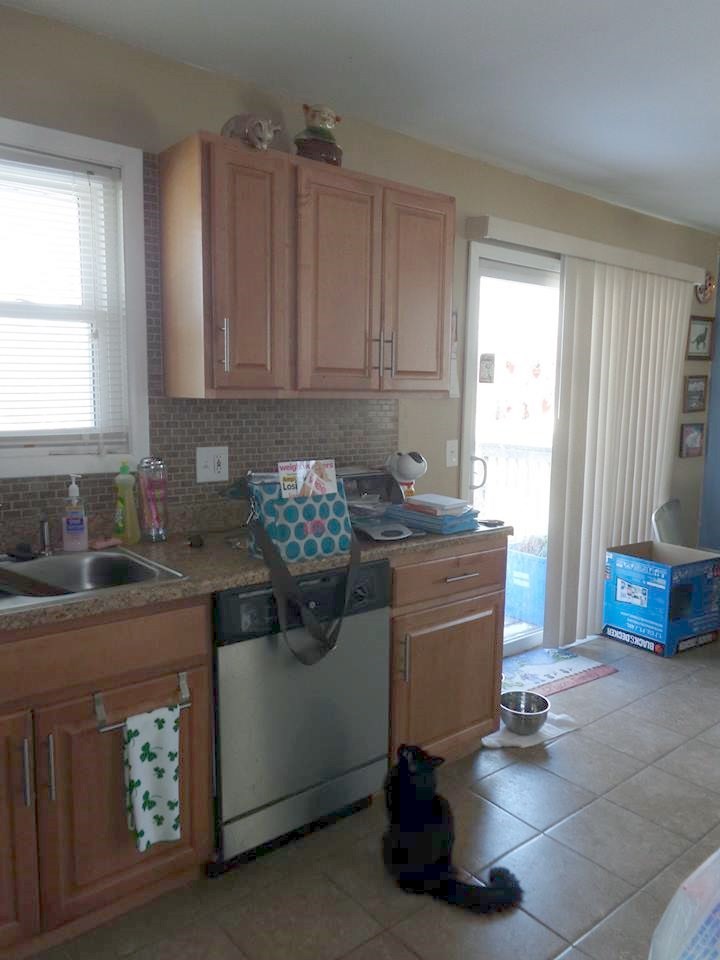 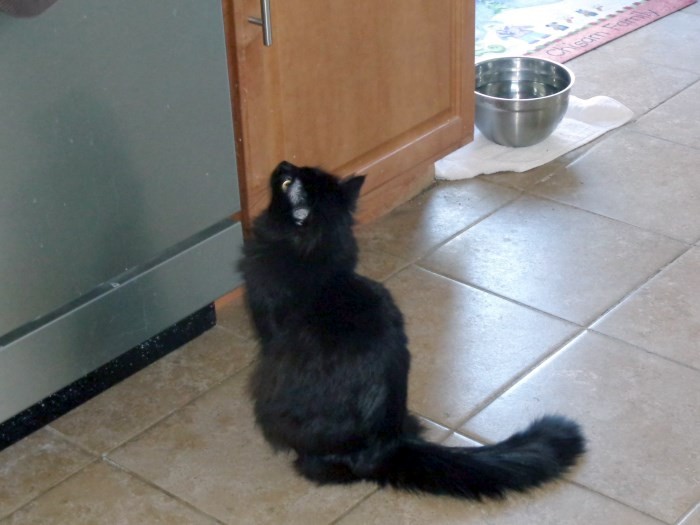 Rambo is trying to reach it: 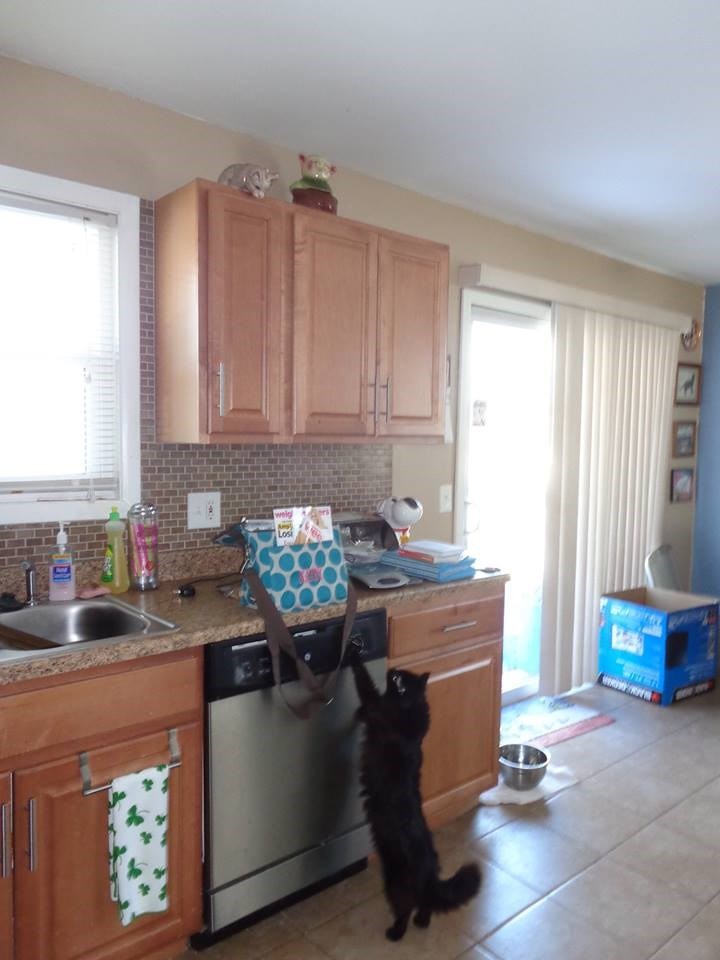 Here are some other pictures of my babies, Rocky and Rambo. Click on them to see full-sized.

Kathy Chisam is a life-long lover of cats and dogs. She has rescued far more than her share of animals, and makes regular donations to a cat rescue in her area, the Animals in Need Thrift Store. When she’s not hanging out with Rocky, Rambo, Ms. Fang, and Shelbie, you can usually find her working at the Gladstone Walmart in KCMO.