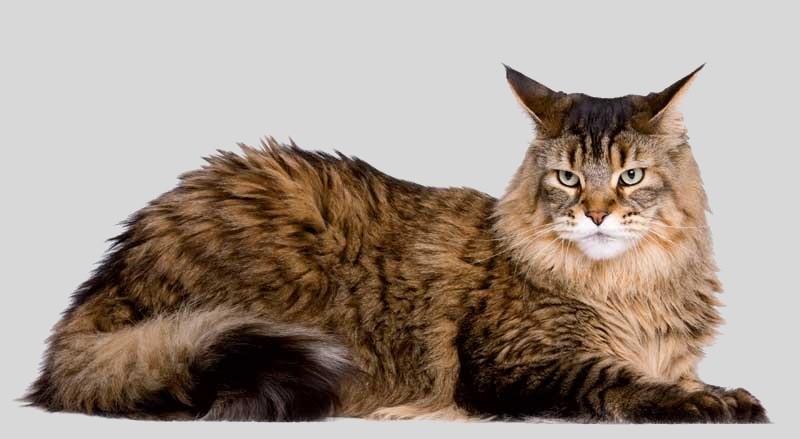 There is a reason that the Maine Coon is considered the gentle giant of the cat world. The breed is large in stature, muscular, highly functional in design, and well-known for having a sweet, kind demeanor. These cats have appeared in works of art throughout later history in Maine, but they first appeared in literary work in 1861 with a feature on a black and white Maine Coon called Captain Jenks of the Horse Marines. 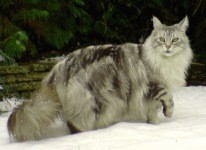 As the name suggests, the Maine Coon originated in the Northern American state of Maine, where it is recognized widely as the official state cat. The true history of this breed is foggy in the mind of feline lovers, and many folk legends have been spoken about with regard to this gentle giant breed. Some say the cat breed descended from Turkish Angoras sent on a ship by Marie Antoinette in an attempt to flee from her scheduled execution. It has also been said that they were brought by a famous ship captain who fancied their comfort on the sea. More than likely, they originated from cats brought by the Vikings during the 11th century.

Larger than most domesticated cat breeds, Maine Coons have an impressive size that is nearly doubled by the thick fur they have. Males tend to weight between 15 and 20 pounds, while females are a bit smaller, weighing between 12 and 16 pounds on average. Some individuals of the breed are larger, while others are smaller than the average. They are generally between 12 and 16 inches tall, and including the length of their tail, they can reach a notable 48 inches long. The Guinness Book of World Records featured the longest cat in 2010, a Maine Coon cat named Stewie, measuring 48.5 inches long from nose to tail.

Maine Coons, also known as the American Longhair, are well-adapted to the cold weather that Maine is known for. Their ears and paws are adorned with large tufts of fur to help with keeping them warm and safe in the cold. Their fur is long and silky, with multiple layers for protection. These layers also require mild grooming to keep felines free of tangles and mats.

The distinguished tail is yet another well-recognized feature of this breed, and they hold them tall and proud on most occasions. A variety of coat colors are available, but most have classic tabby stripes and bold colors. Brown tabby colors are the most common. The Maine Coon has a loving gaze, and eyes can vary from yellow, to gold, to green, to amber.

Maine Coons are known for their hunting skills, and are great mousers. They are also considered to be quite intelligent and trainable, and make wonderful family pets.