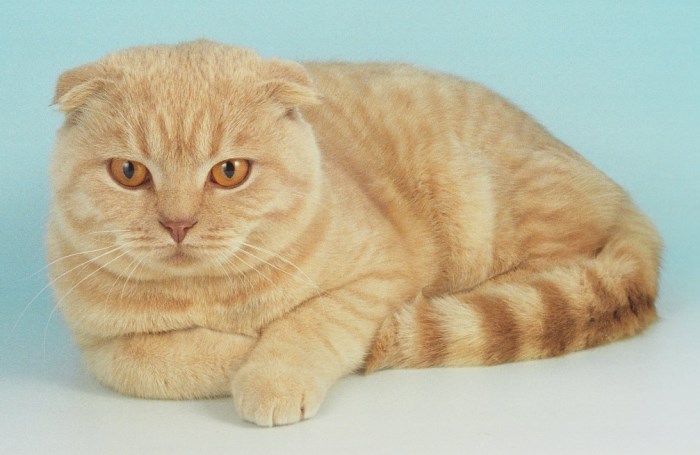 This unique breed was first recognized in 1966, and it began 5 years before that in the Tayside region of Scotland with a white barn cat named Susie who was born with a cartilage defect in both ears. Unlike the erect ears of a normal cat, this defect causes the ears to curl inward. Susie produced a litter of kittens, two of which had folded ears like their mother. Unfortunately, she was killed by a car within a few months of producing this litter. 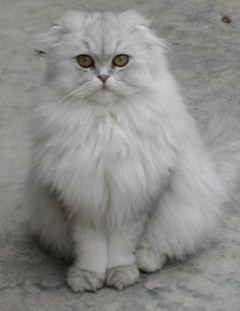 History of the Scottish Fold

William Ross is credited as the first breeder of the Scottish Fold after he raised one of Susie’s kittens, Snooks, and bred her intentionally for the folded ears. Like her mother, Snooks was a white cat with folded ears. The breeding program began with her, meaning that all Scottish Folds share a common first ancestor in Susie.

A total of 76 kittens were born within 3 years of the program beginning, and more than half of these (42) were born with folded ears. Ross then determined that the gene for folded ears is somewhat dominant. What began with a single cat having a single fold in each ear quickly became an entire breed of cat with two or three folds in each ear. 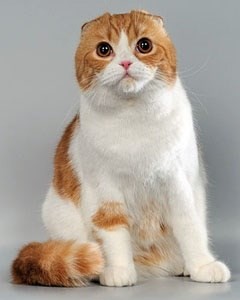 A great number of descriptive terms have been used to refer to the Scottish Fold; “pixie-like,” “owl-like,” and “teddy bear” are all fitting of this adorable breed. The folded ears combined with a round face and large, widely spaced eyes earn this breed these affectionate terms.

Not all Scottish Folds have the classically folded ears, and those with erect ears are sometimes referred to as “Scottish Straights.” All kittens are born with straight ears, and the folds become evident by 3 to 4 weeks old. The quality of the fold is determined by the breeder at 12 weeks of age, and the kittens are designated as show, breeding, and pet quality.

Disposition of the Scottish Fold

Affection and devotion are not in short supply with this breed. The Scottish Fold is known for forming extremely close bonds with its owner, and they are sweet and docile cats. Their intelligence is not an uncommon trait in felines, and they are aware of their own smarts. Playtime is a necessary thing for all Scottish Folds, but they are just as happy to be comfortable in a lap. They are highly adaptable in many situations, and their soft meows and purrs are unlike the sounds other breeds make. Highly recognizable by their preferred “Buddha position,” the Scottish Fold never fails to steal the spotlight and the hearts of admirers.