Cats are often given a negative reputation because of their apparent independence and secretive ways. At times they can seem totally bizarre! Their mysterious behavior often baffles their owners, if anyone can actually own a cat.

One of the oldest myths about cats is that they will smother babies by sleeping on their chest so the baby cannot breathe. An older myth is that cats will suck the breath out of babies and cause their death. Grandmothers have been handing both those scary myths down to their children and grandchildren since the early 1700s with some evidence of it being recorded in 1607.

Myth #2 – Landing on Their Feet

The belief that cats always land on their feet is a common myth that never seems to go away. Cats can be killed by falling from great heights and can be critically injured if the fall is from a short distance that doesn’t allow for the time the cat needs to right itself.

Cats are popular pets for apartment dwellers for obvious reasons, but balconies and open windows are danger spots for curious cats. Simple window screens and balcony screening will prevent deadly falls by your curious bundle of fur.

Another popular cat myth is that a cat uses it’s whiskers to maintain a sense of balance. Actually, a cat’s balance is controlled through its inner ear, like all mammals. Whiskers have a special “feeler” function that cats use to judge if they can pass through a narrow opening. Those whiskers also allow them to navigate in the dark and locate backyard prey when they are hunting.

Many cat owners get irritated when their cat demands attention when they are talking on the phone. Most believe it is cat jealousy. The truth is more likely that the cat hears you talking on the phone in an empty room and believes you are talking to him. His supposed attention-getting moves are actually an attempt to respond to what you are saying.

Cats have often been accused of tormenting those who ignore them. In a room with several people in it, those cat lovers often watch or stare at the house cat. While you might be adoring the cat with your eyes, the cat will interpret it as a direct stare and a challenge. If the people in the room are strangers, it is more likely the cat will make this interpretation and move next to, or on, the guests who are not staring at him.

Of course, you’ve heard that it’s bad luck if a black cat crosses your path; that it’s an omen of certain misfortune. There are many, many myths surrounding black cats, but basically they started during the middle ages, when people began to think that some women were witches. They were usually poor lonely old ladies, many of whom also often happened to take in alley cats and care for and feed them, and the cats became associated with the “witches”. Although, in some countries and situations, black cats are considered to be good luck. What it really means when a black cat crosses your path is that he is trying to get to his destination.

As obstinate and irrational as they seem to be, the myths about cats will probably always be around. But their soft purrs and warm snuggles make it all seem so silly when they curl up and take a nap on your lap. 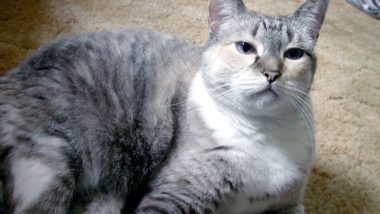 Caring For Your Elderly Cat 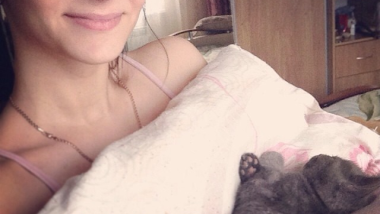 The Pretty Lady and the Gray Kitty