On Halloween night, black cats all over America face a very real danger. Every year, black cats are targeted by cruel people who think it’s fun to hurt them on Halloween. Unfortunately, black cats have long been associated with witches, devils, and other dark forces, and this has led to them being targeted by misguided pranksters and vandals. In medieval Europe, they were even believed to be shape-shifting demons in disguise! In recent years, there have even been reports of black cats being abducted and sacrificed by Satanists on Halloween night.

There are a few possible explanations for why black cats are targeted on Halloween. But Is It A Myth?

Now, according to Becky Robinson, president and founder of Alley Cat Allies, in this article on USA Today, this is all myth and urban legend:

“From stories of them being abused, used for satanic rituals and even abandoned or killed, people have said animal shelters should not let people adopt black cats during the month of October.

But the reality is, black cats don’t actually face increased danger because of Halloween. It’s just an urban legend.” It’s Hard to See Me in the Dark of Night

While the chance of black cats being harmed on Halloween night may or may not be real, you’ll still want to keep your cats secure. There’s a lot going on outdoors that night, and anything may happen. Here are some tips for keeping your cat, black or otherwise, safe on Halloween night:

2.  Even if your cat is in no physical danger, all the chaos and excitement of Halloween may cause it stress. Consider keeping your cat hidden away from view entirely on Halloween night by keeping it in a carrier or crate during Trick-or-Treating hours. You can also put your cat in a room that doesn’t have any windows where it will feel safe and secure.

3. If you must take your cat out for walks, hopefully on a leash, avoid areas where there is likely to be a lot of foot traffic on Halloween night, such as busy streets or crowded neighborhoods.

4. Do not let strangers handle your cat. On Halloween night, there will be lots of strangers in costumes knocking on doors and asking for candy, or passing you on the street. If someone asks to pet your cat, politely decline and close the door, or walk on by.

5. Keep your cat’s ID up to date. In the event that your cat does get out on Halloween night and becomes lost, having current ID will increase the chances of them being returned to you safely. Make sure their ID tags are up to date with your current contact information. 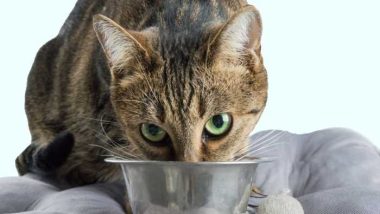