Unique among most breeds of cat for their solid brown fur, the Burmese is a relatively new breed. The first Burmese was seen in the United States in 1930, when a small female, Wong Mau, was imported by Dr. Joseph C. Thompson of San Francisco. 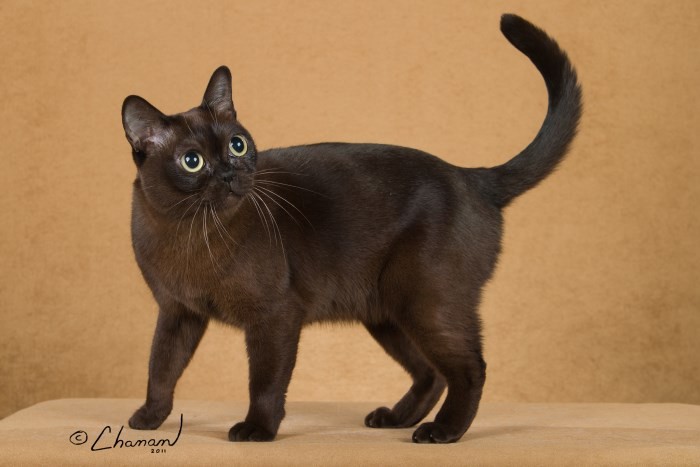 Through breeding her and her offspring to Siamese cats, it was determined that the genes and traits being passed on to the next generation were strong enough and unique enough to consider an individual breed, which Dr. Thompson then contested for from the Cat Fanciers’ Association (CFA). This was vastly different from the way that the breed has previously been viewed in the United Kingdom since the late 19th century, as they were considered miscolored Siamese.

Wong Mau and her offspring shared the unique walnut-colored fur, known as sable, and the original breed acceptance by the CFA was for only this color. Continued breeding with Siamese cats resulted in a variety of colors being seen, and four are now accepted by the CFA. These colors are the original sable, which is a rich brown of a dark hue; platinum, a pale grey with undertones of fawn; blue, a darker version of platinum; and champagne, a soft beige. The acceptance of these other colors was met with great controversy, as many disagreed with breeding in additional Siamese lines. In fact, this practice even resulted in a brief suspension of the breed status of the Burmese by the CFA in 1947.

The development of this breed resulted in two distinct categories: the American Burmese, or the “contemporary Burmese,” and the British Burmese, known also as the “traditional Burmese.” The American Burmese is known for having a rounder head and shorter nose than the British Burmese, a trait that has been admired and bred for in the United States. However, these cats are often carriers for a lethal head fault gene, which results in many stillborn kittens or kittens who must be euthanized shortly after birth, something that is less commonly seen in the “traditional Burmese.” Because of this, the cat registries of the United Kingdom have banned the registration of American-bred Burmese to prevent the introduction of this lethal allele into British lines.

The American lines of this breed sport a sturdier body style than British lines do, which are more sleek but not oriental in nature. As a small to medium sized breed, Burmese are usually between 8 and 12 pounds. Their coat is short and sleek with a glossy appearance. Wide, round eyes are seen in yellow or gold. The Burmese has a slightly longer life expectancy than most purebred cats; an owner can expect to have their companion for 16 to 18 years.

Many have said that this breed is dog-like in its qualities; they are energetic, playful, and loyal. They maintain their kitten traits throughout adulthood, and these cats are not only curious and adventurous, but sweet and affectionate. Because they retain such behaviors, these cats are easy to train and will often “fetch” toys or “play tag” with their owners. The Burmese is a breed that has excelled at feline agility; their energy and level of trainability makes them an ideal breed for participating in feline games. 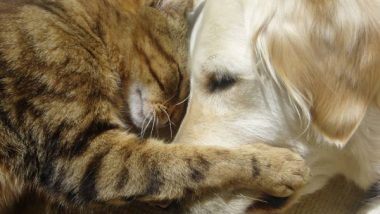 How to Introduce a Cat to a Dog Household 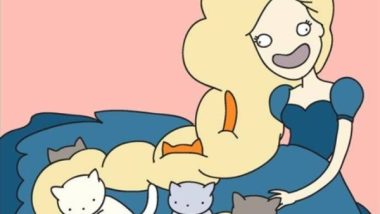 The Best Fairy Tale With Cats Ever