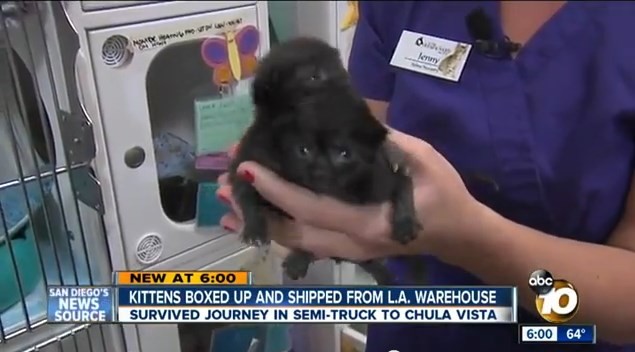 This is a transcription of the video above. (the video was removed by the user, luckily we have a single picture and this transcription)

Imagine the shock for a Cox Communications employee who opened the box at work and found these two newborn kittens clinging to life inside. It certainly surprised them and has Humane Society nurses calling it one of the most extreme stories they’ve ever seen.

This is an incredible story for these two kittens who were about 2 weeks old. They were accidentally packed up in boxes and shipped in a semi, more than a 100 miles from Hollywood to a Cox Communications warehouse in Chula Vista.

As you’re about to see they couldn’t have ended up in a better place.

These two little kittens just survived an unbelievable journey. Somehow they were boxed up with fiberglass equipment. loaded into a Cox Communications semi truck, like this one, and shipped from the L.A. area to this warehouse in Chula Vista.

“They were kind of very, very lucky that they didn’t fall out of it in transport or when we were unloading the trucks.” J.C. Collins has been working here 34 years, and thought he had seen it all. “That’s a first.” He couldn’t believe it when a coworker opened a box and found these two little furballs staring right up at him.

When I first saw them I knew they were very, very young.” Collins called his nephew, who happens to be an investigator with the Humane Society.

They actually came to us with their umbilical cords still attached.” Jenny Bonaname has been helping care for the black kittens and helped name them – Mouse and Wi-Fi. “What we think happened was the mom had the babies. and she put them in a safe spot and she left. So then they got boxed up and they got shipped.”

And they couldn’t have ended up in a better place.

“We’re actually the one of the only around-the-clock kitten nurseries in the country. Most shelters don’t have the resources to be able to provide the around-the-clock care that kittens need.”

And that’s why so many kittens and cats around the country have to be euthanized.

But Mouse and Wi-Fi – “They’re fat and happy. That’s a nice little fat belly right there” – not only survived, but thrived.

Now Mouse and Wi-Fi will live in that nursery for a few more weeks where they will get around-the-clock care and then go to a foster home. When they’re 8 weeks old, they’ll be spayed and neutered, and then be ready for adoption. 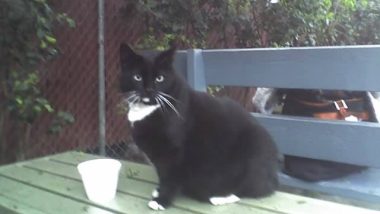 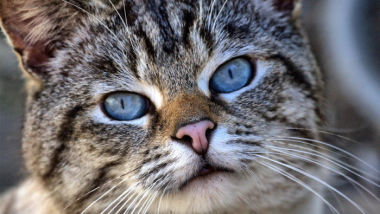