Mama Cat Braves Storm To Bring Her Kittens To Safety

This is the sweetest story! Kate Collins’ son had been feeding a stray, a hungry little cat that had been hanging around his house in the Indianapolis area. He called her Mabel. Mabel was too shy to come in the house, and soon she disappeared –  for a whole month. He had been planning to take her to the vet and hopefully get her adopted, but now she was gone. 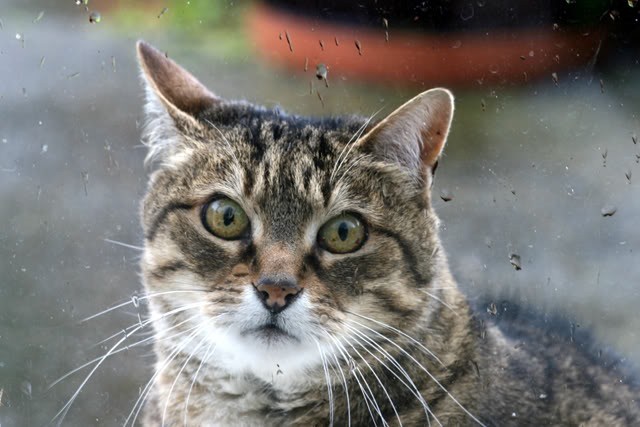 About a month later, she showed up again, hungry, and looking differently somehow. This time, she cautiously came in the house, ate a lot, looked around a bit, and then left again. She did this for about a week, and then disappeared again – this time for two months.

Now this is where Mabel will start to pull at your heartstrings:

“Two months later I heard a loud cry from outside my window. It was six in the morning during a bad thunderstorm. I had decided to sleep with the windows open that night to hear the storm come in. When I heard the crying again I quickly dressed and went to the living room. I opened my sliding glass door and saw Mabel, soaking wet, meowing her heart out.”

Poor Mabel, out there in the pouring rain! She must have been scared to death of the thunder and lightning. But there was more to it than that:

“Then behind her I saw the reason why. There was a very small kitten following her. She led the shivering kitten to my door and disappeared back into the storm. Thirty minutes later she came back, with another kitten. Every thirty minutes Mabel went back into the storm, until, one by one, she had led eight little four-week-old kittens to my door.”

Talk about a mother’s love! Mabel had trekked back-and-forth through the raging storm to get her kittens to safety. If it took 30 minutes to get each one, that means she spent 4 hours in that storm! She brought them to the only person she knew she could trust.

(These are Mabel’s kittens, Cole, Quinn, and Ellie! Click to them see full-sized)

“In that moment when I stepped outside and I looked into that cat’s eyes, there was an exchange of information. She had successfully communicated to me that she needed help. And somehow, over the weeks and months that I had cared for her, she had come to know that I would. Mabel had struggled for hours to bring her kittens to safety, and I owed it to her to make sure they end up in a good loving home.”

(This is Casper and Lilly. Click to see them full-sized)

The kittens have all been named, taken to the vet, are litter trained, and are ready for adoption. Kate Collins also wants to thank her heroic son, who has taken the kittens into his home and is taking such good care of them.

“My son is determined not to  turn them over to a shelter but instead find homes for them and their brave little mother.”

Bless your hearts! We think you and your son are both wonderful people, and we’re so glad that Mabel had a place to take her kittens!

(Monty, Leo, and Killian. Click to see them full-sized)

If you live in the Indianapolis area, and are interested in adopting the mama cat Mabel, or any of her kittens, you can contact Kate here. Tell her we sent you! Also, the top image, the cat in the rain, is NOT Mabel. We don’t have a picture of her, but she is a calico kitty. The pictures of the kittens, however, are the real deal!

Happy ending!!! Just heard from Jason and Kate. Jason says homes have been found for all of the kittens, and he is keeping Mabel!

I am happy to announce that all eight kittens have found wonderful, loving homes. We have decided to adopt Mabel ourselves, along with three of her kittens. Thank you so much for sharing this story! It brings me to tears and I lived it! : )

Imagine 8 kittens, their mom, and my son’s own rescued cat in a one bedroom apartment! But he was too kind-hearted to shut his door that stormy morning. I’m so proud of him.

You have every reason to be proud of him, Kate. You raised a wonderful, kind-hearted son! And Jason, it brings us to tears that it brings you to tears! But thank you both for letting us know the end of this heart-warming story. We couldn’t be happier that Mabel gets to stay with the person she trusted most in this world. We wish you, Mabel, and the kittens all the best! 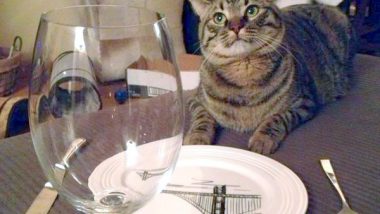 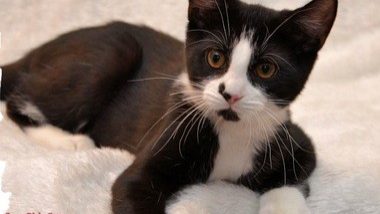